Case Study: How to Generate Leads on Facebook without Breaking the Bank - Rick Mulready
MENU

Case Study: How to Generate Leads on Facebook without Breaking the Bank 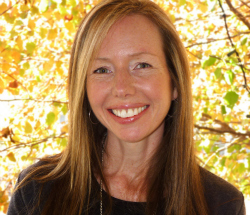 A client of mine recently asked me how to generate leads on Facebook.

As you know from the free email course I just launched, this is one of the most common challenges small businesses face.

Stacey had tried to make Facebook ads work in the past but had zero success.

And, she was convinced they weren’t good for anything other than draining her bank account.

She was willing to try them again, though, since she was gearing up to do a free webinar in the not-too-distant future, and wanted to get new people onto her email list.

This would allow her some time to provide them tons of value in the weeks leading up to the webinar, and get them to know, like and trust her.

She’d then be in a better position to pitch her webinar and have these people sign-up and attend, with the end goal of adding more paid clients.

Knowing that this was her goal, I suggested a Facebook ads strategy that’s worked really well for generating leads.

She’d also likely get an added benefit of building some buzz around her brand while getting more fans for her page.

She was still jaded from her prior experience with Facebook ads, and wasn’t exactly keen on pouring more money into them.

I suggested we start by taking a look at her previous campaign to see where we might be able to make some improvements. We could then take those ideas, incorporate them into my system and test them with the new campaign.

Agreeing with this strategy, Stacey made the necessary changes and launched.

Two Days In and Stacey’s All Smiles

Two days into the campaign Stacey and I had a check-in call to see how the campaign was doing and make any necessary tweaks to it.

As soon as I got on the phone I could tell she was excited. She was already seeing some success.

The campaign was generating a couple dozen leads per day and she wasn’t wastefully blowing through her modest budget like she had before.

I suggested we not mess with the success so far and to let the campaign run its three remaining days, checking in on it periodically.

Did she keep seeing great results?

Let’s fast-forward three days and check out her final stats.

When we got on the phone to discuss the final results, the first thing Stacey said to me made my day.

She told me that because of my system she was now a believer in Facebook ads. That they can work on a modest budget.

How well did they work for her?

Let’s take a look at her final results:

Not bad for someone who had a terrible experience with Facebook ads before, right?

Now, for those of you who are a bit more advanced, there are two further stats that will be important to Stacey as she goes along.

Remember, her goal is to eventually have these new people join one of her webinars.

So, she’ll want to know:

Now let’s get into the nitty gritty of how she set up her campaign.

“I knew that Facebook ads could be powerful because of the targeting options, but I didn’t know how to maximize them. Rick does and he used his knowledge masterfully to help me create an ad that attracted 149 ideal prospects to my list – in only 4 days and for $180. Best of all, I can reproduce what he taught me for future campaigns. For that I can’t thank Rick enough.” — Stacey Curnow, staceycurnow.com

An Inside Look at Stacey’s Campaign

As you know from my email series, I’m a big believer in using Page Post ads to generate leads.

So, the first thing I suggested Stacey do was come up with a status update that featured the e-book she’d be giving away. We’d also want to make sure she included her landing page URL and a distinct call-to-action.

This is what she came up with:

Well, this was the result of our “fine-tuning” a couple of brainstorms. 🙂

Notice a few of the elements that tend to work quite well when using Page Post ads to generate leads:

• Her giveaway is called out in the first sentence. The positioning of “FREE new e-book” right next to the URL acts as her call-to-action.

• The landing page URL has been shortened and included within the first 90 characters.

• She has the title of her e-book right after the URL. It’s a longer title but she’s still able to get most of it within the first 90 characters. 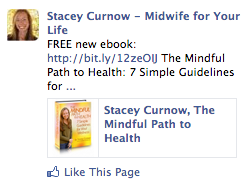 The first 90 characters of the status update are shown in the ad so this is why you want to get as much of the giveaway and URL early in the post as possible.

The challenge is doing it in such a way that doesn’t seem spammy because it’s being posted to your Timeline, after all.

As we know from strategy # 3 in my lead generation system, the landing page that people will land on after clicking your ad is of UBER importance.

It must be relevant to your ad.

And, when generating leads, it’s best to make it as easy as possible for people to give you their email address. For example, showing the opt-in box prominently at the top. 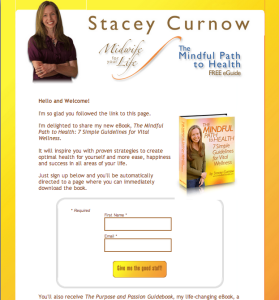 I love it because it’s simple, with lots of white space.

Notice the color scheme and the text at the very top of the page. It echoes her ad exactly.

The copy is short, welcoming, benefit-driven and has a clear call-to-action “Just sign-up below…”

The opt-in box is prominently displayed with a large “Give me the good stuff” button.

SUGGESTION: When testing with future campaigns, I might try a different color button that’s not the same color as the rest of the page. That way, it jumps out more at the user. I might also test a different button call-to-action such as “Get instant access to the e-book” or “Give me the e-book now”.

With these case studies, I want to reveal as much as possible and be completely transparent.

Since targeting is a campaign’s secret sauce, though, I need to be a bit vague here. Stacey is in a fairly competitive niche so I don’t want to reveal too much.

With that said, she looked at her niche and thought about “big names” whose Facebook page she could target.

After figuring out which of those pages she could actually target she chose the four largest ones and used those as Precise Interests.

Be thinking how you could do the same for your own Facebook ad campaign.

What’s an advertising campaign without the ability to track its effectiveness?

With Facebook’s conversion tracking pixel, they’ve finally made this quite easy to do.

Stacey created a pixel and placed it on the “thank you” page that people land on once they opt-in from the landing page. Once Facebook started reporting leads from the campaign, she crosschecked these against her Aweber stats to make sure everything was accurate.

Since she used Facebook’s conversion pixel, she also had the ability to use the Optimized CPM option when setting up her ad. This means Facebook showed her ad to those people within her target audience who were most likely to “convert.”

As you can see, Stacey accomplished what she was looking to do using strategies from my lead generation system. She started by testing and then made some changes to see if they’d improve her results.

There are other strategies from my system she could try too, of course, but since she found one that worked, I don’t recommend she mess with success.

So I’d love to hear from you, would you have tried anything differently with this campaign? What lead generation strategies on Facebook have worked for you?  Let me know in the comments below.

How to Write Copy That Sells In 2.5 Hours Flat | w/Kris Jones

Are You Creating Your Business Around Your Life? | a Dec 2021 Classic