Will the New Facebook Lead Ads Be Worth the Wait? - Rick Mulready
MENU

How She Runs a Wedding Membership With Just 3% Churn, with Faye Cornhill

Will the New Facebook Lead Ads Be Worth the Wait?

They’re testing a new mobile ad called “lead ads” which they’re saying is a “new, simpler way for people to fill out forms on their mobile devices.”

So, rather than sending people to your landing page to opt-in to your email list, people will opt-in right from within the ad.

Check it out — two taps of the screen and people are added to your list: 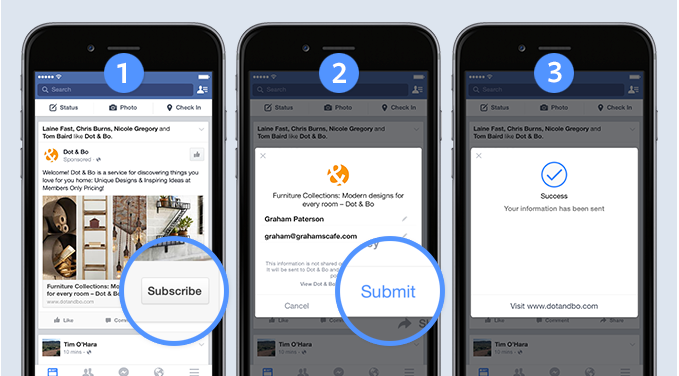 Well, it could be.

As is usual when they roll out new ads functionality, they’re testing it with only a small group of businesses right now.

So, I think it’s way too early to start cart-wheeling to the bank.

I definitely think there are some pros and cons to this new ad unit.

First, I think the concept of lead ads is awesome.

The fact that Facebook realizes that the primary objective of many of its advertisers is to generate leads, and they want to make it easier, is a huge “pro”.

It could really be a big-time game changer for those of us looking to build our email list with Facebook ads.

Since people don’t have to leave Facebook to give you their information, and it auto-populates, that could mean a lot more opt-ins and a lower cost-per-conversion (depending on how they charge for lead ads, see below) in a given campaign.

That they’re rolling these ads out on mobile is another “pro”.

About 800 million people access Facebook via their mobile device each day but getting people to opt-in to something on their phone or iPad is often challenging.

What I question, though, is the quality of leads that this type of ad unit might attract.

I think there’s something to be said for people clicking through to a landing page, reading text or watching a video about you and what you’re offering, and then making a decision to give you their email address.

With lead ads, it looks like people are only going to have to read the ad and then decide to subscribe to your list — all with two taps of their finger.

The fact that it’s so easy is cool. But I do think the quality of lead might suffer.

Another “con” that I see is many of us use Facebook ads to get registrations for webinars.

Out of the gates, lead ads don’t appear to solve for this.

Facebook would have to come up with some sort of integration with the webinar platforms, like GoToWebinar for example, and I don’t see this happening any time soon. I could be wrong, though, and I hope I am.

Finally, if these new ads crank up conversions and are a big success for advertisers, Facebook would likely charge a premium to use them.

Again, it’s too early to tell, but the potential increase in costs could be another “con”.

What Do You Think?

Overall, I love the direction Facebook is heading with lead ads.

It could take lead generation with Facebook ads to a whole new level, but it’s way too early.

Again, my biggest concern at this point is the quality of the leads we might be attracting.

Time will tell, though.

Do you have lead ads yet?

What do you think of this whole concept?

How She Runs a Wedding Membership With Just 3% Churn, with Faye Cornhill

5 Observations On Facebook/IG Ads That Can Improve Your Results

The Evolution of a Multi-Million Dollar Offer

How the “5 Ps of Alignment” Affect the Success of Your Business, with Annemie Tonken