How to Use Facebook’s Mobile Ads to Boost Your Business 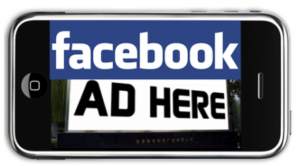 I just got the new iPhone 5 and I love it (especially since I’m now on Verizon, but that’s a whole other story).

After having the “4” for the last two years and having a lot of issues with it being slow and freezing far more times than I think a phone should, I’m blown away at how fast the 5 is.

I don’t want to throw this one out the window like I did my previous phone.  Seriously, I can’t tell you how many times I just wanted to chuck the thing.

Rather, I’ve found myself wanting to use the 5 because it’s a lot of fun and does a ton of cool things.

No, this post isn’t about the new iPhone, but if you want to read a quick hands-on review of it, my buddy Sean Ogle from Location180.com wrote a useful post on it here.

When sales of the new phone opened a couple weeks ago, Apple reported selling five million phones in the first weekend.

It was the biggest opening weekend of sales for any of their iPhones…and pretty indicative that people have been waiting for the release of the 5 for a while.

I was one of those who’ve been waiting.

What this is also indicative of is the sheer number of people in the world using smartphones today.

At the end of last year, there were almost 500 million smartphone users in the world.

With so many people using smartphones these days, it represents an awesome opportunity for us marketers to reach a really captive audience through mobile advertising.

Here are 3 reasons why you may want to consider including mobile in your next Facebook marketing initiative.

1) There are now over 1 billion people on Facebook and over half of them access it from their mobile phone.

You do the math.  That’s a whole lot of people to target ads to.

Studies have shown that mobile users tend to view these types of ads as less obtrusive than the “standard” marketplace ads that you see when you access Facebook on your computer.

3) Even though mobile ads have only been available a few months now, they appear to be outperforming Facebook’s desktop ads.

By outperforming, I mean they have higher click-through rates and a greater rate of interaction such as comments and Likes.

Granted, click-through rates aren’t the end-all-be-all when it comes to measuring the effectiveness of your advertising.  But, unless you’re an advertiser who is solely looking for awareness and branding, clicks are an important metric to look at.

In my view, you can look at the early success of Facebook’s mobile ads one of two ways.

On the flip side, you could say the higher click-through rates are due to the so-called “fat finger” issue where people are accidentally clicking on the ads.

This may be the case, but realize all mobile advertising can experience this.

I’ve seen enough positive data so far that I’m going to be testing Facebook’s mobile ads out myself.

How Do You Set Up Facebook’s Mobile Ad Options?

If you’re not currently working with a Facebook rep, as a small business or online entrepreneur, you can only set up mobile-specific ads through Facebook’s Power Editor.

Here’s a quick video I created that shows you exactly how to set up your own mobile ads:

With all the pressure from investors to monetize its mobile platform, though, we’ll undoubtedly see quick advancements from Facebook’s mobile offerings.

We’re already seeing it with their testing ads in 3rd party apps and games.

Tons more to come, I’m sure.

What do you think about Facebook’s mobile ads?  Have you seen them when using your mobile device?  Have you used them in your own ad campaigns?  Would love to hear in the Comments below.

Get your tools today!